According to the World Health Organization, nearly one out of six deaths in humans is caused by cancer. Cancer is defined as uncontrolled growth of cells in various parts of the human body. It mainly caused by genetic mutations.

Despite cancer emerging as a significant cause of mortality, progress in finding novel ways to treat cancer is relatively slow.  Chemotherapy, radiotherapy and surgical removal of tumors remain the mainstay of cancer treatment.

Chemotherapy, another term for anticancer medicine, has a special function in the treatment of cancer. Unlike doses of radiation or surgical intervention, chemotherapy drugs may act as an effective medication in the management of widespread cancer.

Most conventional methods to treat cancer cells have serious side effects because they are also hazardous to healthy cells in the body. Besides that, anti-cancer medication can be exceedingly costly for the patients and time consuming to produce.

Identifying or discovering new effects of presently authorized drugs, such as the use of low-dose aspirin to prevent heart attack, is not uncommon in the field of medicine.

Interestingly, when used by people diagnosed with cancer, anticancer characteristics have been discovered in a number of currently used medications. On the basis of these studies, clinical researchers estimate that these findings not only have the potential to enhance cancer therapy but also decrease the time necessary to develop new anticancer medications. This seems to be the case with this canine dewormer for cancer.

According to a new scientific article published in one of the world’s most cited scientific journals “Nature”, a popular and affordable anthelminthic dog dewormer fenbendazole may play an important role in the treatment of cancer.

A dewormer drug Fenbendazole may be useful in cancer treatment

Fenbendazole is a frequently used broad-spectrum anthelmintic/antiparasitic medication in veterinary medicine. Despite the fact that the dog dewormer fermandazole is used to treat parasites and hookworms, this drug has sparked a new possibility of curing cancer after Panacur C dog dewormer was used by Joe Tippens to treat his lung cancer. You did read it right, a dog dewormer for cancer treatment.

Since Joe Tippens story of recovering from a cancerous illness, as a canine dewormer for cancer, fenbendazole has become a hot issue of debate in the world of health. The fenbendazole cancer success stories have taken cancer forums and blogs by storm. The use of fenbendazole for humans is being widely skepticized in curing cancer by some, while on the other hand, many are following Joe’s protocols to treat cancer.

The Joe Tippens protocol is a treatment method that combines the use of fenbendazole, tumeric, CBD oil, and vitamin E. Vitamin E was considered an optional component in Joe’s protocol, now only turmeric and CBD are the most important pieces.

Now the latest research shows that it may help kill cancer cells and hence cure cancer. It acts on cancer cells in a variety of ways, causing them to undergo apoptosis (programmed cell death). This means that you wouldn’t be wrong if you said that they repurposed dog medicine for human cancer. 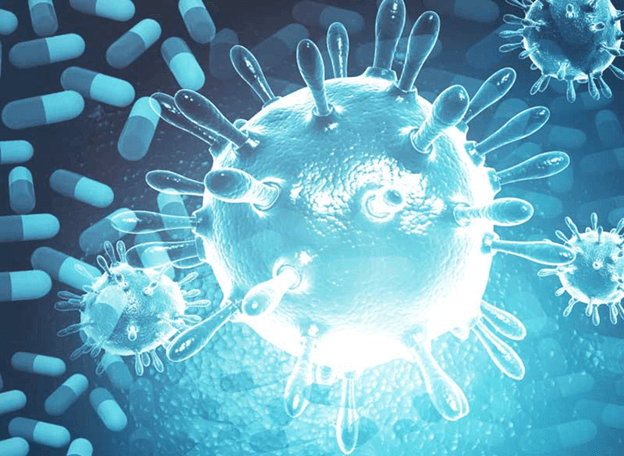 How long does fenbendazole take to work?

Fenbendazole mainly acts as a microtubule destabilizer. This dog dewormer for human cancer acts as a micro-destabilizing agent in the body as it quickly inhibits the mitosis of cancerous cells. Microtubules are unique proteins that play a crucial role in many processes of the cells in our body, particularly those that develop quickly, such as cancer cells.

Microtubules are necessary for cell architecture, nutrition transport, DNA synthesis and other functions. Because cancers depend on fast cell division, inhibiting these processes is crucial. The dog worming tablets fenbendazole prevent the development of microtubules in rapidly growing cells. The fenbendazole’s mechanism of action inhibits the process of rapid division of cancer cells which simply means prevention of cancer in the body.

Targeting microtubules is not new in cancer therapy. Many well-known cancer medications do this, including vinca alkaloids (vinblastine, vinflunine, etc.), paclitaxel and docetaxel. Tubulin-binding medications attack malignant cells by disrupting the dynamics of microtubules, which are necessary for DNA segregation and hence cell division.

When compared to other anticancer medications such as nocodazole and colchicine, researchers noted that the fenbendazole dog dewormer had a lesser impact on cellular microtubules. This is a positive thing since it explains why fenbendazole is virtually non-toxic and less harmful in comparison with these chemotherapy drugs.

Interestingly, unlike taxanes (paclitaxel) and vinca alkaloids, using dog dewormer on humans had no effect on the expression of p-glycoprotein. Patients who are repeatedly administered taxanes or vinca alkaloids develop resistance to these and many other medicines owing to their action on glycoprotein but in case of fenbendazole, the resistance was not developed by the immune system.

This implies that cancer cells are considerably less likely to acquire resistance to fenbendazole as well as to other anticancer medicines, which is a good sign. Since many cancer therapy regimens lose their effectiveness over time, fenbendazole tablets for humans have shown promising results in the treatment of cancer patients.

In the most recent laboratory investigation on cancer cells, up to 30% of cancer cells perished after 32 hours of fenbendazole therapy. Fenbendazole inhibited the division of these cancerous cells. This experiment was done on highly aggressive cancer cells called non-small cell lung carcinoma (NSCLC). In petri dishes it took days to eliminate the tumors. In humans it might take weeks or months to show the first results of this dog dewormer for cancer. 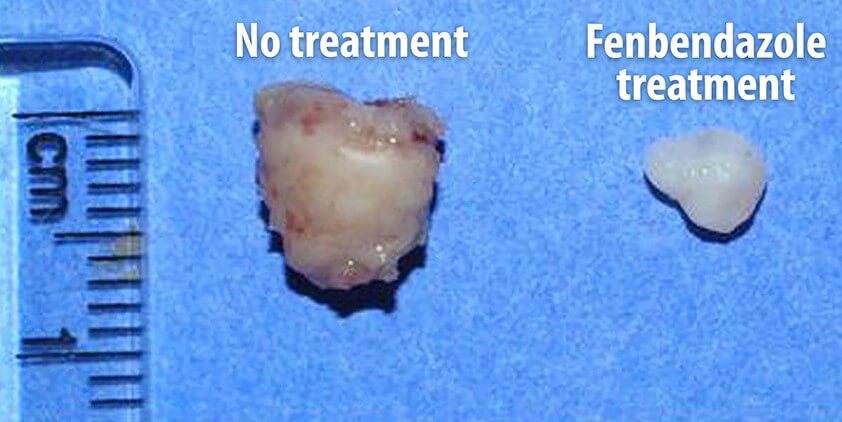 It seems that fenbendazole has a devastating impact on the growth of cancerous cells. Cancer cells are stopped from dividing via inhibiting mitosis and existing abnormal cells are eliminated more quickly by inducing programmed cell death (apoptosis), all of which may result in tumor eradication.

Fenbendazole’s anticancer effects are further aided by an increase in the expression of p53. This is a protein that aids in the regulation of cellular life cycles and the prevention of cancer cell formation in humans.

Cancer cells divide and develop more rapidly than healthy ones. This implies it may be easy to starve them by altering their energy consumption. Fenbendazole blocks sugar uptake and starves malignant cells. As such, this dog dewormer for humans blocks cancer in many ways.

It impairs glucose (a type of sugar) metabolism gateways (GLUT-4) and may inhibit glycolytic enzymes like Hexokinase II, which utilize glucose for energy. Cancer cells perish when their metabolism is slowed down. Healthy cells don’t face this impact since they need less sugar as compared to cancer cells. Only certain malignant cells are starved and destroyed by glucose blockade, since healthy cells need 50-100 times less glucose than cancer cells.

On the whole, fenbendazole targets microtubules and affects the life cycle of cancer cells and tissues. It also affects tumor cellular metabolism by disrupting glucose metabolism.

Various modes of action mean that there is almost no possibility for cancer cells to develop resistance to the drug. Because it targets several routes, if resistance develops to one mechanism of action, fenbendazole may still affect cancer cells in other ways. Furthermore, fenbendazole may be used with other anticancer treatments owing to its unique mechanism of action and low toxicity.

Combination of fenbendazole with other anticancer drugs

Most cancer treatments require therapy with multiple medications to eradicate the disease and prevent relapse. If used alone, fenbendazole may not always be enough to stop some cancers. Fortunately, research indicates that it can be safely combined with various antitumor medications. According to Joe Tippens, a combination of fenbendazole, tumeric, CBD oil and vitamin E. Vitamin E is considered an optional component in the Joe Tippens’ protocol.

The latest study looked into the benefits of combining fenbendazole with other treatments like dichloroacetate (DCA), 2-deoxyglucose (2DG) and so forth. In the study, fenbendazole showed strong synergism with DCA or 2DG. This means that when it was used along with these anticancer substances, the effectiveness of the therapy increased by multiple times. The synergy of usage of multiple anticancer drugs has shown incredible results as compared to using fenbendazole alone.

To summarize, fenbendazole works by disrupting microtubules, stabilizing p53, and interfering with cellular glucose metabolism, resulting in the faster elimination of cancer cells. Because fenbendazole has already been shown to be safe for use and is widely accessible, there is undoubtedly a need for further comprehensive clinical studies with the medicine, so it could be added to the arsenal of anticancer therapy as soon as possible.

What brand of fenbendazole did Joe Tippens use?

In the protocol described by Joe Tippens, a brand called Panacur C was used along with other components like CBD. The usage of Panacur c for humans then started to gain popularity after Joe’s story went viral. Fenbendazole belongs to a class of microtubular-level destabilizing agents.

Like other benzimidazoles (e.g., albendazole, mebendazole), fenbendazole has shown significant results in treating cancer. Although very few studies have been conducted on the topic, utilization of Panacur C for cancer treatment is considered safe.

According to studies, the use of this dog dewormer for cancer treatment should be appreciated. Scientists and researchers are looking to repurpose this dog dewormer medicine to officially treat cancer in humans.

Despite the fact that there are fewer studies on the cancer-treating abilities of fenbendazole, it is still observed that humans can tolerate the drug easily and no contraindications have been found.

The treatment protocol for fenbendazole is relatively simple and easy.

Fenbendazole is distributed by many brands. Panacur C is a popular cancer-treating option nowadays. It doesn’t matter which brand you use as long as you are getting a calculated 222 mg dosage of fenbendazole.

Panacur C is the most popular dog dewormer, it is made by a company named Merck. There are two versions of fenbendazole distributed by this company. One is called Safeguard which is specifically designed for deworming house pets, while Panacur C is designed for setting farms.

Fenben Lab is a company that distributes fenbendazole to the consumers worldwide. This company sells fenbendazole in the form of powder just without any fillers.

Homelab Vet is another company that distributes fenbendazole. They offer fenbendazole in many forms like powder, liquids and oral tablets. This company is based in Ukraine and offers worldwide shipping.

Sigma-Aldrich, which is considered the biggest chemical product manufacturer as well as supplier in the world. It also distributes fenbendazole. This company mainly focuses on producing analytical quality products that are mainly used for research purposes.

Most of these products are available online and can be easily bought on websites like Amazon. These products can also be found in local pharmacies.

To summarize, the use of dog dewormer for human cancer treatment has significantly increased in past few years. The most popular treatment is using Panacur C / safeguard by Joe Tippens’s method. It has been discovered that there is an excellent improvement in patients and their cancer by using fenbendazole.

What Is Fenbendazole and How Can It Affect Cancer Treatment?

Fenbendazole for humans, an anti-worm drug that is also anti-cancer