If you have animals, then you’ve definitely heard of Fenbendazole. Fenbendazole is a drug used for parasite and anti-worm treatments in animals. It is a common drug for veterinary use. The primary use of this particular drug is to destroy worms such as hookworms, roundworms, tapeworms, parasites, and whipworms.

So, what does this drug have to do with cancer treatment? Plenty of different studies show that this drug can do much more than that. It can:

Here, we will focus on one particular study conducted in 2008. We will talk about this drug in detail. What makes it so good, and could it really have these potential benefits studies say they do. Let’s delve deeper into the often-overlooked drug called Fenbendazole. 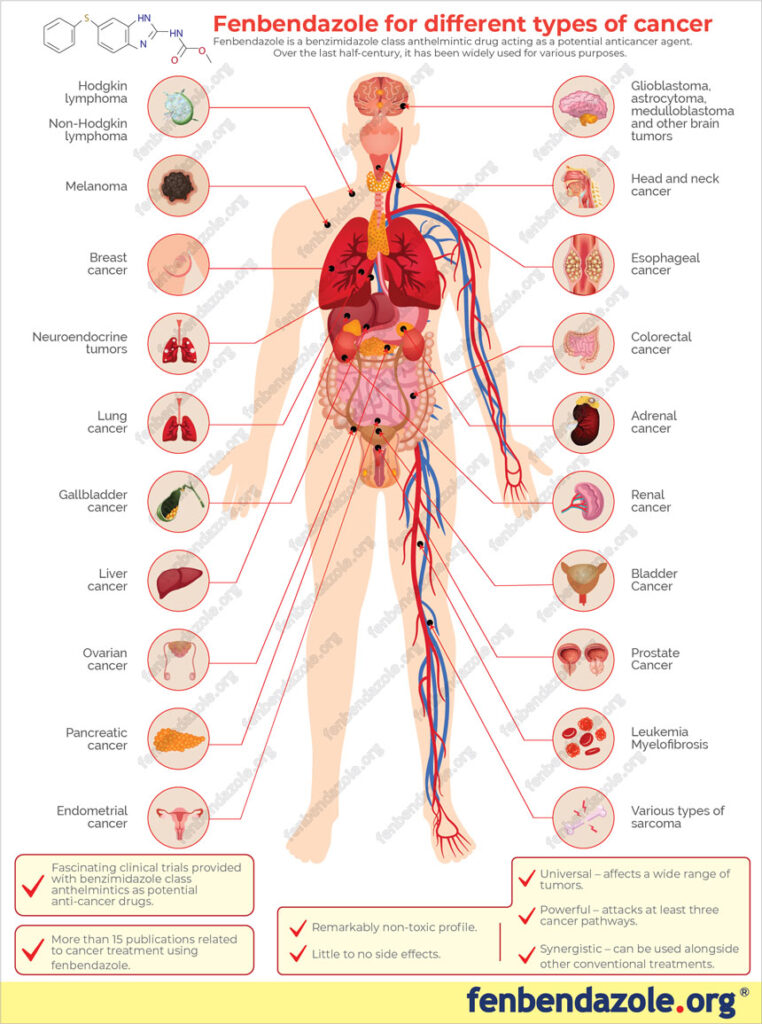 Why Are Vitamins Important for an Effective Cancer Treatment with Fenbendazole?

Fenbendazole has always been the go-to drug for treating rodent pinworm. It is easy to use, and there aren’t any scary side effects. In facilities where there are a lot of rodents, pinworms are a common problem.

In this study, Fenbendazole was used as a part of a diet because of how safe it is. There are rarely any side effects. But, the drug showed unexpected positive results.

To test the effects of the drug on cancer cells, researchers used xenografts. These are experimental cancer cells implanted in animals for testing. They were tested on mice. According to the statistics, the cancer cells failed to grow. The main reason was the Fenbendazole.

When the Fenbendazole was combined with vitamin supplements, it showed potent anti-tumor properties. The vitamins included in this particular study were E, B, D, K, and A. All of these vitamins are known for their antioxidant properties.

The statistics show that Vitamin E has powerful anti-metastatic and anti-tumor effects in animal studies. The main purpose of this vitamin is to suppress the tumor. Based on the same research, consuming plenty of vitamin B and dietary folate can be effective for reducing colorectal cancer in women.

The drug alone doesn’t have the same beneficial properties. In fact, it doesn’t even affect tumor growth. But, when combined with the vitamins, it is a completely different story. As a result, the combination of vitamins with Fenbendazole seems promising. Without these vitamins, the drug wouldn’t be that effective.

However, more research and substantial evidence are necessary to analyze the cell types. Depending on the substances used during testing, the results can differ.

Fenbendazole can be effective against different types of cancer cells, including Lymphoma. The main reason being the size of the tumor. Since the drug blocks the glucose in the cancer cells, it deprives them of their main source of fuel – sugar.

In this particular graph, you can see the results of the treatments for reducing tumor volume. There were four different diets. The mice first received lymphoma cell injections and then a specific treatment based on their group. One group received Fenbendazole, other just vitamins, and a third group received a combination of both. All of them were compared with the controlled group. As you can see, the group that received a combination of Fenbendazole and vitamins had far more significant results compared to the rest of the groups. This proves how effective a diet with vitamins and Fenbendazole can be for reducing tumor volume.

Fenbendazole works in a similar way to colchicine (a known destabilizing agent). But, it can’t compete with Taxol or other Vinca alkaloids. It adds anti-cancer properties in its own way. In other words, this drug could be efficient for supporting metabolic therapies, radiotherapy, and chemotherapy.

What About Using this Drug on Humans?

Even though this drug is typically used in veterinary medicine, humans can still tolerate it. According to the European Medicines Agency, humans can tolerate a specific dose of Fenbendazole. More precisely, for ten consecutive days, a human can handle 500 mg. But, if it’s a single dose, it can be up to 2,000 mg.

Despite the current primary use of Fenbendazole, this drug has a lot more potential. It could be a valuable anti-cancer drug. This study focused on tumor growth and how the drug affects it. Since cancer cells use sugar as their main source of fuel, researchers tested the Fenbendazole drug to see how it will affect the sugar uptake. When combined with vitamins, this drug showed positive results. The size of the tumor significantly reduced more than compared to other controlled groups. Since this drug interferes with glucose metabolism, it can be effective for cancer therapy.

This drug is often ignored because we use it on animals. But, humans too can handle it. It is a safe drug with little side effects. What is important is the strategy used to make the most of its benefits. Repurposing this drug for cancer treatment not only could be beneficial, but it can also be cost-effective.

It could reduce the cost necessary for developing new and expensive drugs.

Fenbendazole for humans, an anti-worm drug that is also anti-cancer